Facebook has begun rolling out a redesign of its desktop site. Users have the option to opt in to the new design (or switch to the classic Facebook) which places a heavier emphasis on two of Facebook’s most critical features: events and groups. The redesign was previously exclusive to the Facebook mobile app and was first announced at the F8 developer conference last year.

Similar to the mobile app redesign last year, the new desktop layout gives you quick access to some major Facebook features and employs a cleaner, simpler design with more white space. The redesign includes larger fonts and sleeker icons, a simplified layout plus a dark mode. Facebook Stories have been moved above the “Update Status” box, while just above the “Stories” section, there’s a redesigned menu bar housing several tabs previously found in the left-hand corner of the screen, such as Groups and Events.

The most significant change in the desktop’s design is the new “Groups” tab located on the redesigned menu bar. Clicking on the tab will bring you to a personalized feed of updates from groups you are a member of while also suggesting groups for you to join based on your interests.

To can try the new design: 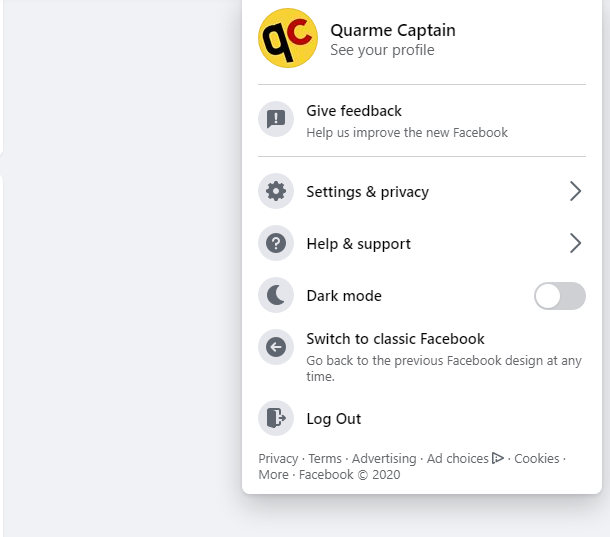 Want your content published on QuarmeCaptain.com? Send them here

15 ‘Gen Z’ Terms You Should Know To Survive Online

Facebook’s Ad Targeting will be Affected by iOS 14 Update

Share:New changes in iOS 14 will give users more control over privacy and data tracking ...
By QC Contributor
March 31, 2020

In just over a week since the launch, Brazil's central bank has suspended the service ...
By Quarme Captain
June 24, 2020

Messenger Rooms feature is being rolled out for WhatsApp users

Share: An article I published last month pointed to a possible Messenger Rooms shortcut in ...
By QC Contributor
March 31, 2020

WhatsApp may have a shortcut to Messenger Rooms soon

2021 Global Health Summit to be held on October 29

What does the future hold for eSports in Ghana?

The Best of September: Top Tech Stories of the Month

Everything You Need To Know About KNUST MasterCard Foundation Hostel